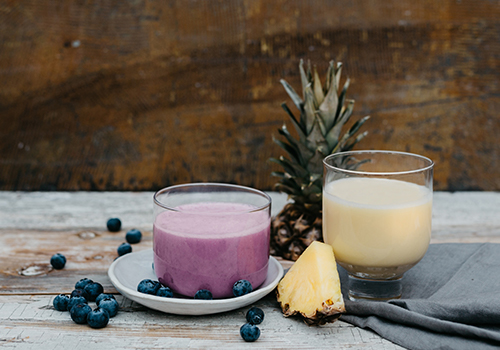 The start of 2020, was a delicious one for Modifast, presenting the launch of two new Modifast LCD drink flavours, adding to the already very wide range. The new products are Modifast LCD Blueberry and Modifast LCD Exotic.

Both of the new products contain yoghurt flavour as well as small bits and pieces of berries and fruit. As a result, the taste is less sweet in most of the other drinks in the range, giving the consumer an even wider spectrum of flavours to choose from.

Just like the other Modifast LCD diet replacement products, the new products can be used to replace single meals or be used during a strict diet, replacing all normal food with four Modifast LCD meals per day.

Modifast LCD Blueberry and Modifast LCD Exotic are sold exclusively at www.modifast.se, but in general a big part of the Modifast range can also be found in the pharmacy channel.

We use cookies for the page's function and customization as well as for aggregated statistics and advertisements. The cookies that are categorized as necessary are stored in your browser, as they are necessary for the website's basic functions to function normally. We also use third-party cookies, which help us analyze and understand how you use our website. These cookies are stored in your browser only after your approval. You also have the opportunity to opt out of these cookies, but by doing so you risk that your experience of the website will be affected.
Essential Always Enabled

Necessary cookies are required for the website to function properly. This category includes only the website's basic functions and security features. These cookies do not store personal information.

Cookies that are not absolutely necessary for the website's functionality and are used specifically to collect personal data via analysis tools, advertisements or other embedded content are classified as non-essential cookies. The user's consent is required to use this type of cookie on a website.